*This post is part of a virtual road trip, which traces the routes taken by characters in The Great Offshore Grounds. For more on that go here.

Neither sister had seen the rustbelt, but it was apparent that a giant metal locust had crawled across this part of the country leaving behind its discarded shells in the form of smelters, bridges, ironworks. They drove along the Great Lakes where tall ships were reenacting a famous battle, their sails flying, circled by helicopters from cable channels. They, too, were after a different history…p 75

I first spent time in Michigan when I was touring through there with my band in the late 90s. My first Michigan memory was trying in a rest area near Battle Ground with people banging on the sides at 3am.

Our first show was in Flint, which was still deep in its Roger and Me period.

The booker said the woman from the movie who was surviving on rabbits lived down the street. He took us around and pointed at huge beautiful houses, Victorians, and warehouses with lofts and sunlight—you could buy whole blocks of Flint for $30,000 and the city would give you $20,000 extra to fix them up. It was that kind of dilapidated and abandoned downtown core.

We played in front of a beleaguered Tuesday-night-in-Flint audience. The band after us, a local one, rendered The Wall flawlessly. THE ENTIRE ALBUM.

At first it was funny. Then I felt joy at the disjointedness. By track 5, I was all bought in. Clearly, the only thing you could do on a Tuesday night in Flint was play The Wall start to back. And the conflation of Rogers, the tyrant Smith, and the traumatized Waters, was not lost on me either.

Our next show was in the Cass Corridor in Detroit, which was different in 1998. The people in Flint told us not to go there. They said it was too dangerous. One woman told me that if we did go, we should strip the van and buy a shotgun. In attempt at a polite pass, I said we didn’t have the money for a shotgun.

“Honey, this is Flint,” she said, “You can get a shotgun for fifty bucks on a Wednesday morning year-round.”

After those years of touring, though, I didn’t see the Rust Belt until 2013 when I spent a month on the tall ship, US Brig Niagara, and, somewhat unwittingly, ended up in a re-enactment of the 1813 Battle of Lake Erie.

The re-enactment had 7000 small craft full of drunken onlookers encircling the tall ships. Helicopters from the Discovery Channel carried it live while the Ohio State Marching Band played and a B52s flew over and saluted us. Donors dressed in period clothing or “funny clothes” were loaded on like sardines, rumored to be up to $1000 a head, they jammed up against each other on the deck for a romantic ride and ended up vomiting over the side in a small chop. Every time I end up in the Rust Belt, new things happen.

I took the picture below in the evening, after the re-enactment, when we sailed for Erie, PA, free of fanfare and funny clothes.  It was one of my favorite moments on the US Brig Niagara.

But the idea of re-enactment stayed with me. There are civil war re-enactments and Custer’s Last Stand re-enactments. In Japan there are Samurai re-enactments. I once came across people on horses in armor jousting under an overpass in Seattle (looking at you SCA).

It’s very telling, the histories we choose to re-enact. Usually not the Palmer Raids or The Wounded Knee Massacre.

“Can you imagine if they reenacted women’s history? Hundreds of teenagers in bonnets dying in childbirth. It would be fucking perfect.Heroic midwifes race between bedsides covered in blood.” p98

Snowy hillsides in winter, canopies of green, the foliage of fall. It cut down through mineral-rich black earth and struck the bone undercarriage of an enormous bleached ribcage. That’s where the whale was. You could track the spine straight back up the hill to where town fathers planned their homes…p77

Lowell, the City of Spindles where women wove slave-picked cotton to scratchy cloth, struck for wages, were crushed, and went back to weaving again. p81

I began work as labor organizer in 1999 as a “salt” trying to organize Amazon at their warehouse in Seattle.

After that, I worked for 1199NW organizing hospitals. The picture below is from my first campaign. Note the “You are crazy if you’re going to try to talk to me now” expression on my face. It could also be “What do you mean they left the country for three weeks?” Or maybe, “There are no hot pockets left at the 7-11? How the hell am I going to get dinner?”

I loved the workers I met and learned a lot about what it means for people to trust each other. Little is said about the way the intimacy of righteous struggle transforms people’s lives. It’s not just wages and benefits; when workers demand respect and dignity on the job, they demand it in their lives. They leave abusive husbands, learn to drive at 57, get the eye glasses they’ve need for 15 years – they become powerful actors in all aspects of their lives. The experience of organizing can change the workplace, the person, that person’s’ family, and the community.

This happened with the Lowell Mill Girls strike in 1836. Even though they lost, many went on to organize for suffrage and build for other strikes. The document below is from their first strike. It may be the first Vote Yes petition in US History…?

If you want to know more about the strike in Lowell, check out their Library. They also know a lot about Jack Kerouac and Ruth Bader Ginsburg.

Canals and Rust Belts, mill workers and whalers–these things fascinate me, their physical structures, their social and economic structures.This is the point in my meandering where my editor would intervene and say, “It’s a character-driven book!”

The first road trip in the novel ends in Boston. Really it ends at the shores of The Atlantic, site of tea parties and whalers. When I was in New Bedford last winter, I went to the Seaman’s Bethel, where whalers and their families prayed for safe return, and eulogized the dead in Cenotaphs.

Poor people have always gone out into the world and gambled with their lives. They have signed on to factories and ships for a lay that always gets longer.

And Cheyenne, Livy and Essex are no different.

Road trip #2 begins next week. It goes down through central California, cuts east through the southwest and south to end up on the shores of the east coast once again. If you want to find a public event, go here, and if you are a book group and would like a copy of the lovely book group guide that Knopf made, go here.

Vanessa Veselka (Portland, OR) has been at various times, a teenage runaway, a sex-worker, a musician, a union organizer, and a student of paleontology. Her work appears in GQ, Bitch, The Atlantic, Tin House, Zyzzyva and Best American Essays. Her novel Zazen won the 2012 PEN / Bingham Prize for fiction. Her new novel, The Great Offshore Grounds is available now on Knopf. 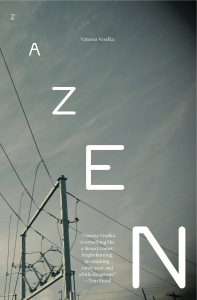 Buy from Powell’s or AbeBooks